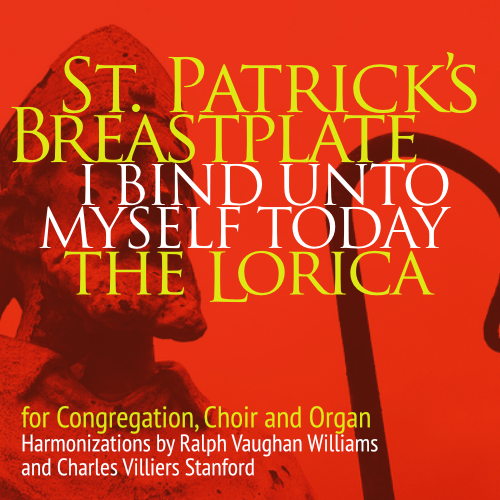 I bind unto myself today

A comprehensive, seven-verse arrangement of the Lorica, opening with the Ralph Vaughan Williams harmonization, and then incorporating the work of Charles Villiers Stanford, who created the original setting, which he adapted from traditional sources. The Stanford verses here have been conflated from his nine-verse setting (1912), and adapted for typical use in the US, where congregations are usually enthusiastic participants in hymn singing. See the information tabs below for details about this arrangement.

The text is in the form of a Lorica, a traditional Celtic form of protective prayer going by the Latin word for a garment of spiritual armor, hence the English name 'Breastplate.' The Lorica sancti Patricii is found in the in the Irish Liber Hymnorum in an ancient Celtic dialect, attributed to the 5th C giant of Celtic Christianity. One of the earliest citations appears in the 9th C Book of Armagh where the recitation of the Lorica sancti Patricii is referenced as one of the four means of expressing the appropriate liturgical remembrance. The 7th C. Celtic dialect in which the hymn is rendered is considered forensic evidence that the Liber hymnorum is more ancient than the earliest manuscripts that have been so far discovered. (You can read more from the Irish Diocese of Meath, which has provided a translation in an informative commentary.) Following several failed attempts at rendering this into a congregational setting, success was achieved by Charles Villiers Stanford, who assembled several traditional tunes of his Irish homeland drawn from a collection by George Petrie, which Stanford was editing at the time. The resulting arrangement (all eight pages of it!) can be found in the Church of Ireland's Church Hymnal; many hymnals publish a harmonization for the 1906 English Hymnal by Ralph Vaughn Williams; the Irish Church Hymnal and Hymns Ancient and Modern use one of Stanford's settings. The text was translated into metrical form for singing by Cecil Frances Alexander (Once in Royal David's City, All Things Bright and Beautiful), combining iambic and trochaic syllabization with a mixture of LM and LMD passages.

I bind unto myself today
the strong name of the Trinity,
by invocation of the same,
the Three in One, and One in Three.

I bind this day to me for ever,
by power of faith, Christ's Incarnation;
his baptism in the Jordan river;
his death on cross for my salvation;
his bursting from the spiced tomb;
his riding up the heavenly way;
his coming at the day of doom:
I bind unto myself today.

I bind unto myself the power
of the great love of cherubim;
the sweet "Well done" in judgment hour;
the service of the seraphim;
confessors' faith, apostles' word,
the patriarchs' prayers, the prophets' scrolls;
all good deeds done unto the Lord,
and purity of virgin souls.

I bind unto myself today
the virtues of the star-lit heaven
the glorious sun's life-giving ray,
the whiteness of the moon at even,
the flashing of the lightning free,
the whirling wind's tempestuous shocks,
the stable earth, the deep salt sea,
around the old eternal rocks.

I bind unto myself today
the power of God to hold and lead,
his eye to watch, his might to stay,
his ear to hearken, to my need;
the wisdom of my God to teach,
his hand to guide, his shield to ward;
the word of God to give me speech,
his heavenly host to be my guard.

I bind unto myself the name,
the strong name of the Trinity,
by invocation of the same,
the Three in One, and One in Three.
of whom all nature hath creation,
eternal Father, Spirit, Word:
Praise to the Lord of my salvation,
salvation is of Christ the Lord.

Toulon - God of the Prophets

Victory - The strife is o'er