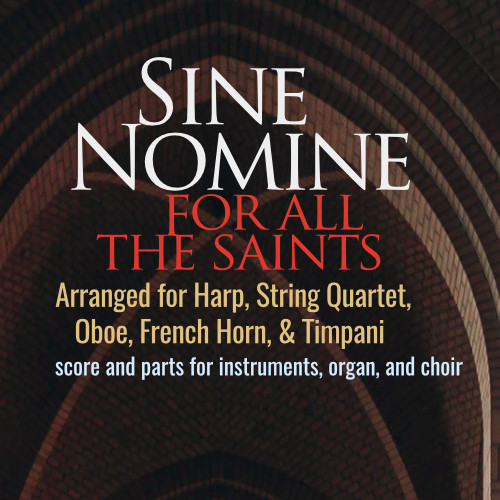 For all the saints

William Walsham How's text For all the saints was published in 1864, and predates the tune with which it is today iconically paired, Ralph Vaughan William's SINE NOMINE, which appeared the 1906 English Hymnal, of which the prolific Vaughan Williams was editor and contributor. Contemporary hymnals wrap six unison verses around two harmonized verses, bridged with Alleluia refrains. This version uses original Vaughan Williams harmonizations, with several verses arranged with new instrumentation and harmonies. (more below.)

Sine Nomine
For all the saints

Note: conductor's score is on 11x17 pages portrait mode, each verse fits on a two-page spread.

Most of this difference is for the license we have to pay to include the text of O God beyond all praising. 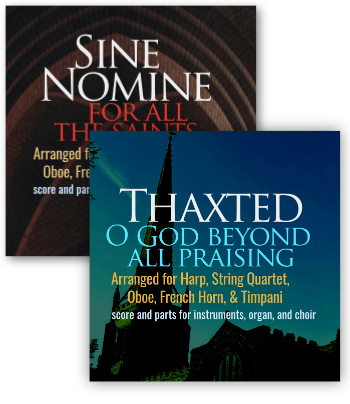 The tune SINE NOMINE is one of four original hymnal settings by Ralph Vaughan Williams, introduced in the 1906 English Hymnal and written specifically for this text; it replaced a tune he confined with other offenders "to an appendix at the end of the book, which we nicknamed the 'Chamber of Horrors.'" There were originally eleven stanzas, but three of them - for the apostles, the evangelists, and martyrs - do not appear in most hymnals. This version uses original Vaughan Williams harmonizations, with several verses arranged with new instrumentation and harmonizations. This hymn is most often used as a processional hymn in observance of the Solemnity of All Saints. The word saint is of French derivation, a cognate of the Latin sanctus, holy. (The Old English word for holy is hallow, as in 'hallowed be thy name,' and for the night before this feast, All Hallows Eve.) In one measure, a change in the baseline was introduced in the 1933 edition (v.1, under 'rest,' to create a suspension). Sine nomine is Latin for 'without a name,' and though this is a case of Vaughan Williams - who published the tune anonymously - trolling the future, it is nevertheless reminiscent of the lectionary for the Feast of All Saints, "And there are some who have no memorial, who have perished as though they had not lived; they have become as though they had not been born, and so have their children after them." (Ecclesiasticus 44). The Charles Villiers Stanford tune ENGELBERG (When in our music God is glorified) was also written for this text, appearing in two years earlier in the 1904 edition of Hymns Ancient & Modern.

In the Anglican doctrine of the Communion of Saints, Christ's church on earth is considered to be the Church Militant, the assembly of the faithful gathered in great numbers (lit. 'thousands', the mili of militant). The faithful that that have gone before is the Church Triumphant. These comprise a whole, the Communion of Saints, the word communion itself of Augustinian coinage meaning 'together one.' It includes all the faithful, as Walsham How makes explicit in the verse

O blest communion, fellowship divine!
We feebly struggle, they in glory shine;
Yet all are one, and all in thee are thine, Alleluia!

In terms of historical linguistics, there is an interesting double entendre. Before it became uniquely associated with soldiers, milito more generally meant 'one who serves,' a meaning we hear an echo of when we say to a member of the armed forces "Thank you for your service." Soldiers both serve and assemble in thousands. With the loss of verses dedicated to Apostles, Martyrs, and the Evangelists, the hymn loses the counterbalance of the Church Triumphant, the milia milium (thousands upon thousands, the countless heavenly host) who will return with Christ at the end of time.

The definition of saint, and of the Feast of All Saints, is rather a muddle. The observance emerged in the late 4th C. as a collective feast for the martyrs (on May 13); in the 8th century, Gregory III declared the date of Nov. 1 to commemorate the lives and relics "of the holy apostles and of all saints, martyrs and confessors, of all the just made perfect who are at rest throughout the world." This has a universal ring to it - all the faithful at all times and in all places, a reading largely preserved in the Reformation tradition. But in strict liturgical tradition, the Nov. 1 date became reserved for Mary, the martyrs, apostles, and saints canonized in the Roman tradition; Nov. 2 emerging as the Commemoration of All the Faithful Departed, or All Souls Day. Bishop How, the people's bishop working in London's industrial East End, considered the entire church militant seems to be the saints, all who serve as a soldier with countless others (thousands) to be saints, their status determined by faith and service alone, not the decision of a conclave of luminaries:

For all the saints, who from their labors rest,
who thee by faith before the world confessed,
Thy name, O Jesus, be forever blessed, Alleluia!

1.* Organ
For all the saints, who from their labours rest,
Who Thee by faith before the world confessed,
Thy Name, O Jesus, be forever blessed.

Alleluia, Alleluia!
2.* Strings, organ ad lib.
Thou wast their rock, their fortress and their might; thou, Lord, their Captain in the well-fought fight; thou, in the darkness drear, the one true Light.

Alleluia, Alleluia!
3. Organ (free harmonization)
O may thy soldiers, faithful, true, and bold,
fight as the saints who nobly fought of old,
and win, with them, the victor's crown of gold.

Alleluia, Alleluia!
4. Strings and Harp, organ ad lib.
O blest communion, fellowship divine!
We feebly struggle, they in glory shine;
Yet all are one in Thee, for all are Thine.

Alleluia, Alleluia!
5.* Choir, Organ (a cappella ad lib)
And when the strife is fierce, the warfare long,
Steals on the ear the distant triumph song,
And hearts are brave, again, and arms are strong.

Alleluia, Alleluia!
6. Full ensemble
The golden evening brightens in the west;
Soon, soon to faithful warriors comes their rest;
Sweet is the calm of paradise the blessed.

Alleluia, Alleluia!
7.* Organ
But lo! there breaks a yet more glorious day;
The saints triumphant rise in bright array;
The King of glory passes on His way.

History of Hymns, C. Michael Hawn,  For All the Saints  UMC Discipleship Ministries