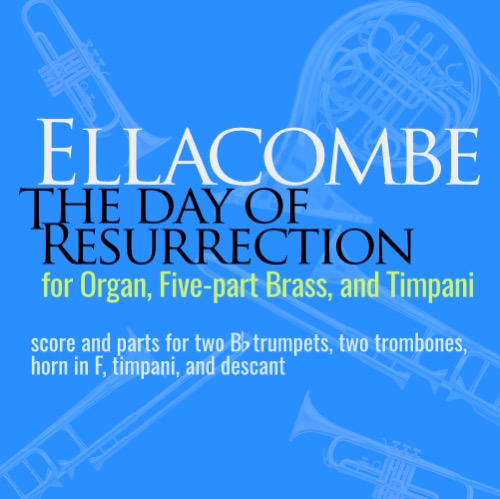 The Day of Resurrection

Despite it's anglicized name, this is a German tune that appeared first in a songbook written in 1784 for the Duke of Würtemburg. Intended for use in the court's Roman Catholic chapel, the text was Ave Maria, klarer und lichter Morgenstern ("Hail Mary, clearest and brightest morning star"). It reappeared, with some accumulated changes, as ELLACOMBE in the 1868 supplement to Hymns Ancient and Modern and applied to a children's hymn. The hymn 'The day of resurrection' is adapted from one of the eight Golden Canons for Easter, c. 750 in the Byzantine form of chant (kanon) developed by St. John of Damascus - the equivalent of Gregorian chant, and to whom the text is attributed - at a time when the eastern and western churches were united.

1 The day of resurrection!
Earth, tell it out abroad;
the Passover of gladness,
the Passover of God.
From death to life eternal,
from this world to the sky,
our Christ hath brought us over
with hymns of victory.

2 Our hearts be pure from evil,
that we may see aright
the Lord in rays eternal
of resurrection light;
and listening to his accents,
may hear, so calm and plain,
his own "All hail!" and hearing,
may raise the victor strain.

3 Now let the heav'ns be joyful,
let earth her song begin;
let all the world keep triumph,
and all that is therein;
let all things seen and unseen,
their notes let all things blend,
for Christ the Lord hath risen,
our joy that hath no end.