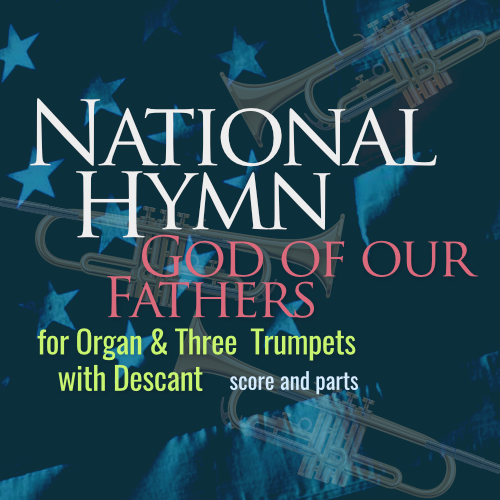 Congregational hymn arranged for accompaniment by organ and three trumpets.

The author of the text "God of our fathers," Daniel Crane Roberts, rector of St. Thomas Episcopal Church in Brandon, Vermont, wrote this hymn (ie, the text) for his town's US Centennial celebration - sung to the tune (irony alert) RUSSIAN HYMN, which at the time was in use as the national anthem of czarist Russia.  Some years later, with the Episcopal Church preparing a new hymnal, Roberts submitted the work, anonymously, to the commission overseeing the project. To his surprise and delight, it was selected. With the observance of another centennial pending - that of the US Constitution - it would simply not do that this text be sung to another country's national anthem. George William Warren of St. Thomas Church in New York wrote the setting NATIONAL HYMN for this text, and it was used at the Constitutional observance, and published in the Hymnal 1892; this has been an inseparable pair ever since.

But who are these 'fathers?' Despite the patriotic character of the music and the poet's teleological shading ('Thy word our law'), the hymn preempts secular considerations by first venerating the God of creation - the 'starry band' is a cosmological reference to the Milky Way. Even at this date in modernity, these 'shining worlds' were thought to be the entire observable universe, wonders observed from the beginning by our biblical fathers. The Creator who is before and above all creation, of time itself, is the first consideration. In the second stanza, a form of American exceptionalism is explicit, 'Thy word our law', voicing an expectation that an America now spanning the continent was emerging to a future place as a leader of nations, hinting at a manifest purpose to facilitate God's millennial peace, a project more difficult than imagined. In his commentary on the UM Hymnal, C. Michael Hawn notes that the hymn's arc is that "God will lead us from the war and pestilence of our earlier captivity to the freedom and light of peace." The most common alteration (for inclusive language) is to translate 'our fathers' into 'the ages,' but this is unsatisfying - 'creation' would be more in keeping with the cosmological impulse of the first stanza.


Lectionary.org, The Hymnary, History of Hymns. The Gaffney Ledger

1. God of our fathers, whose almighty hand
Leads forth in beauty all the starry band.
Of shining worlds in splendor through the skies
Our grateful songs, before thy throne arise

2. Thy Love divine hath led us in the past.
In this free land by thee our lot is cast.
Be thou our ruler, guardian, guide, and stay.
Thy Word our law, thy paths our chosen ways.

3. From wars alarms, from deadly pestilence,
Be thy strong arm our ever sure defense;
Thy true religion in our hearts increase,
Thy bounteous goodness, nourish us in peace.

4. Refresh thy people on their toilsome way;
Lead us from night, to never ending day;
Fill all our lives, with love and grace divine,
And glory, laud, and praise be ever thine.

Though we can't publish them here due to copyrights, you can view on the Hope Publishing Company website (link will open a new tab)
"O God beyond all praising"