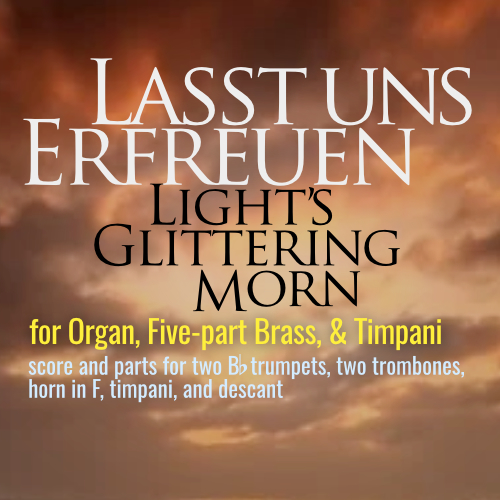 Together with "All Creatures" 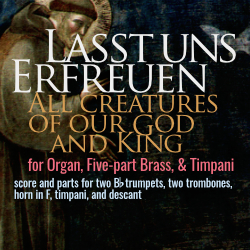 The hymn Light's glittering morn is translated from the 9th C. office hymn, Aurora lucis rutilat ("Dawn's light glitters") found in the Frankish Murbacher Hymnen. Because it is written in an Ambrosian meter, it is thought by some scholars to have antecedents though no earlier sources are known. The texts are in Latin with translations in Old High German formatted as interlinear glosses. The original eleven verses plus doxology have since been separated in the Roman Breviary into three separate hymns for use at Lauds, which is sung at daybreak; the current version is from John Mason Neale's translation, as found in the 2013 edition of Hymns Ancient and Modern, which compresses the original versification into a single, five-verse hymn.

This tune was the setting for the Easter hymn, Lasst uns erfreuen herzlich sehr, which celebrates the resurrection narrative from the perspective of Mary. It first appeared in the Jesuit hymnal Ausserlesene Catholische Geistliche Kirchengesänge (Cologne, 1623, ed. Friedrich Spee), and the setting quickly produced variants regarding the distribution of the alleluias. German literature usually attributes authorship of both the text and the tune to the collection's editor. As a poet and hymnologist, the attribution to him of the text is plausible; however there are no first-hand references to support an assertion of musical composition. Moreover, the opening phrase can be found in a tune 100 years earlier attributed to Matthäus Greiter and adapted to GENEVAN 36 and 68, published in 1525. Authoritative English language sources are devoid of the attribution. Originally rendered in common time, Ralph Vaughan Williams' harmonization rendered the music in the now more familiar 6/4 for the 1906 English Hymnal.

The Hymn Society of Great Britain and Ireland, Treasure No 46: The Tune ‘LASST UNS ERFREUEN’ as we know it

2 That Eastertide with joy was bright,
the sun shone out with fairer light,
when, to their longing eyes restored,
the glad apostles saw their Lord:

3 He bade them see his hands, his side,
where yet the glorious wounds abide;
the tokens true which made it plain
their Lord indeed was risen again:

4 Jesu, the King of gentleness,
do thou thyself our hearts possess,
that we may give thee all our days
the tribute of our grateful praise:

5 All praise be thine, O risen Lord,
from death to endless life restored;
all praise to God the Father be
and Holy Ghost eternally: