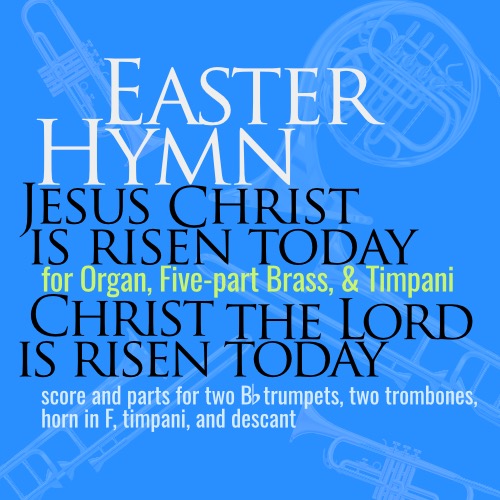 Score and parts for EASTER HYMN arranged for two trumpets, two trombones, French horn, and Timpani. Includes descant with both Lyra Davidica and Charles Wesley texts. Contents include the score in legal format (horizontal); all parts are US letter format.

The tune EASTER HYMN was first published in the 1708 volume, Lyra Davidica, with the title The Resurrection. The composer is unknown. The older of the two English texts commonly sung to this tune, 'Jesus Christ is risen today,' is based on a 14th C. Latin hymn found in a manuscript from Munich, Surrexit Christus hodie, the English translation hewing closely to the original. A later manuscript from Breslau includes a verse - Mulieres o tremulae - alluding to the first witnesses, the women who came to the tomb:

Haste ye women from your fright
take to Galiliee your flight.
To the sad disciples say
Jesus Christ is risen today.

Unlike the staid metrical psalm settings predominating English hymnody, EASTER HYMN incorporates more variety, with melismatic Alleluias assigned to the congregation. The tune is English in origin, appearing first in tune-and-bass score only, which would not be unusual in the figured bass era, and later as a faburden (tune in the tenor). It was immediately popular, and other musical adaptations were common until it took its final form in Hymns Ancient & Modern (1861). The first English translation appeared together with the tune, and underwent several modifications, concluding with the additon of a doxology in 1882. Charles Wesley wrote the the text 'Christ the Lord is risen today' in 1739 in A Collection of Tunes, Set to Music, As They Are Commonly Sung at the Foundery, an abandoned facility that was the home of London's first Wesleyan congregation, the prosody more consonant with the pietistic sensibilities of the time, less didactic than its ancient forbear.

2 Hymns of praise then let us sing Alleluia!
unto Christ our heav'nly King, Alleluia!
who endured the cross and grave, Alleluia!
sinners to redeem and save. Alleluia!

3 But the pains which he endured, Alleluia!
our salvation have procured; Alleluia!
now above the sky he's King, Alleluia!
where the angels ever sing. Alleluia!